Well a great night at the awards following our 8 nominations.

We picked two awards, one for Tunedin!@myplace as highly recommended in the Tourism and Leisure and Treetops, a special commendation .

The night was highly entertaining with George Clark presenting. He withstood the gentle banter and heckling as he mentioned the words ‘Caravan’ and was cheered each time he mentioned his own programme!

Well done to the other winners and we were pleased to be with BAM and Esh on two tabels to celebrate our success and also to enjoy with Esh, on the Project of the Year.

I must say a big thank you to David Furniss who has overseen the event grow into a magnificent annual celebration of the works in the North East region. He will be a tough act to follow for his successor.

The night was a long one and as we all made our way home (in the early hours of the morning), my wife Anita righlty noted that as it was our own home that had won, Treetops;  then we would be the only winners on the night who would be going home to sleep in our award wining project . A lovely thought to finish a great evening out. 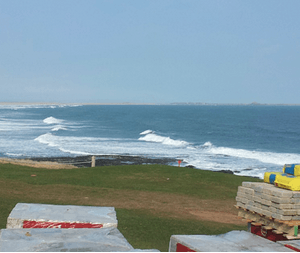 The most beautiful view from a Site
RIBA awards