Award-winning Durham-based architect, Howarth Litchfield, is celebrating the completion of an exclusive residential scheme in one of Gosforth’s most desirable streets.

Plans for the conversion of the listed Coach House, situated on The Drive and within Gosforth’s conservation area, to create eight properties all within a private, gated community and with a central courtyard, were conceived by the building’s owner and developer, Chris Summers of McDougall Dodds (Properties) Limited. (McDougall Dodds)

Howarth Litchfield was formally appointed in March 2019 after being invited to bid for the project based on client recommendation.

This experience provided a firm foundation for the redevelopment of The Coach House where every effort has been made to retain and reuse the original materials including the existing pitched roofs of Westmorland natural slate which were carefully removed, recorded and boxed, ready for reinstatement following roof upgrade works.

Additionally, the new stonework to the courtyard area was matched and tumbled to age it prior to use and internally, the building alterations and extensions have been sympathetically designed to integrate new structural members while existing roof timbers were strategically exposed to key areas to respect the historic fabric and provide warm, honest living spaces.

“As this is a listed building, extensive pre-planning and planning engagement with Newcastle City Council’s planning and conservation team was required to arrive at the final design.  The proposals included the demolition of a modern flat-roofed extension to the courtyard along with extensions to the rear, courtyard and roof to create space to subdivide into eight spacious luxury dwellings.

“Overall, we are delighted with the composition, which has proved challenging in respect of complying with conservation requirements for a building of this age and has drawn extensively on our heritage experience.

“We understand that four of the eight dwellings have been successfully sold, demonstrating that there is pent up demand for quality residential accommodation in this area, where very little premium housing comes onto the market, so this is wonderful news for our client.”

The completed development comprises three two-bedroom and one three-bedroom open plan apartments – two on the ground floor and two at upper floor level; two three-bedroom houses, centrally positioned in each wing of the building and overlooking the courtyard, as well as two three-bedroom bungalows positioned to the rear of The Coach House and offering private gardens.

Chris Summers, whose family have owned the site since 1970, has always had ambitious plans for its redevelopment and is delighted with the completed scheme.  He added:

“This stunning conversion offers an unparalleled opportunity to live in carefully designed elegance within one of the city’s most sought after post codes. It was always our aim to give this wonderful, listed building a new lease of life and together with our carefully selected professional team, we believe that we have managed to achieve this.

“My Father bought the Coach House in the 1970’s and it has remained in the family business ever since.  He was always very proud to own such a prestigious building and we hoped that this would also be true of the finished development.  Just days after completion of the build a number of the units were occupied and it was great to see the building restored to its former glory and full of life once again.

“We look forward to selling the remaining units and leaving the building to be enjoyed by future generations to come.” 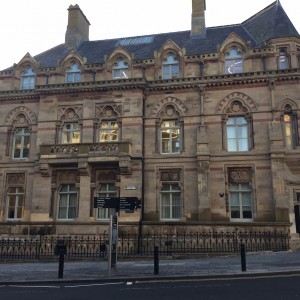